Understanding musical developments outside the mainstream and interest in the unusual have brought together a group of people, who have established a regular indie music event in Regensburg: Its name is SUBLIME. The concept of the “sublime” also shows itself throughout the graphic design of the flyers, posters and the homepage, which by using in turns animals and dolls in high-contrast graphics and typographics have achieved a high recognition value after a short period of time. After all it was Heinrich von Kleist who said that dolls and animals are the only superior beings. 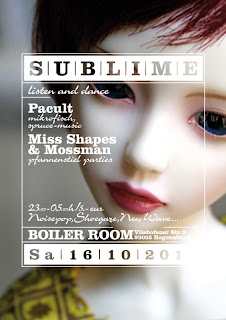